I am Cubless after having and enjoying the '56 Loboy we had from '06-'09. Sold it to fund one of the many ongoing DIY home projects. The kids were not happy and to make amends, I purchased a '47 Cub last October. For no particular or rational reason, I just could not get the kids to love this machine as they did the Loboy. They wanted their old Cub back.

So this past spring, I sold the '47 and told them I would go looking for another Loboy. After poking around for a few months, I found an advertisement for a '56 Loboy with FH (just like our old one) about one hour away. I told the gentleman I would be there on Friday. He said there were a couple of interested buyers so he would not hold it. No problem, I will take my chances. Got to his place and the Cub was gone. Fifteen minutes prior to my arrival, the Cub was being hauled away.

While speaking to this gentleman, he was telling me that if I was interested, he has a JD model LA he had been working on for a few years but has lost interest. He would sell it to me. I was disappointed and knew little of JD tractors so I politely refused but said I would read up on the model. After a couple of weeks and talking with the kids (no Loboys in our sites), I told him I would be interested. Drove to his place and purchased the LA. Turned out to be $800 less than the Loboy. My wife was happy.

If you are a true JD collector, this model LA is missing the tag, a few sheet metal parts and it currently has no electrics. The engine has been redone and and it cranks just fine. I was told it is a 1944 Model LA.

Anyway, these are the pictures. The kids and I are enjoying it. Still not the same as our original Loboy. We will have one again someday. 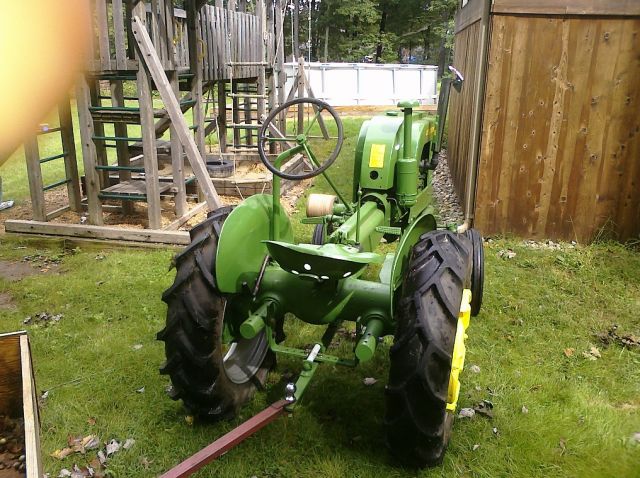 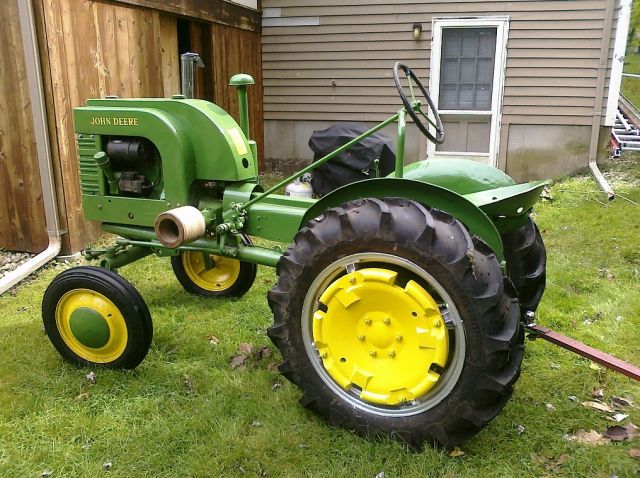 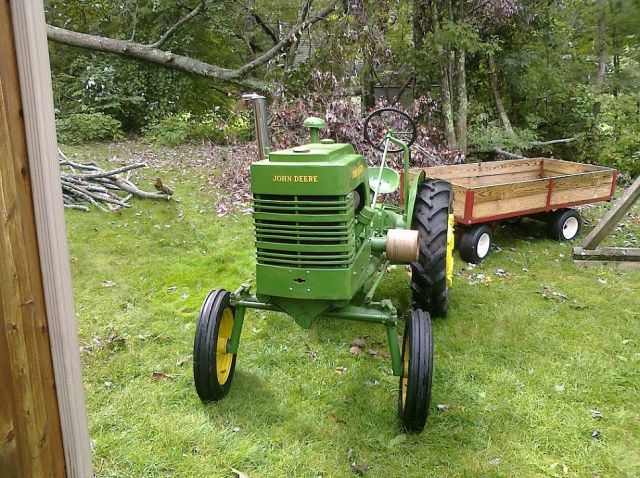 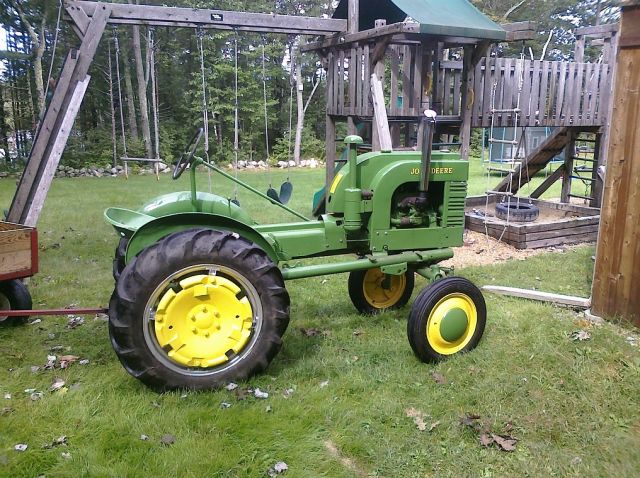 I have seen them at shows but have never been around one. However, I do have a quick little story about one. A relative of my B-I-L told me that a John Deere LA was the first tractor they ever had on the farm. He was used to cultivating corn with horses and would drift off to sleep as he rode the cultivator. The horse would just stop when they came to the end of the row. Well the first time he cultivated with the tractor he drifted off to sleep. The tractor didn't know to stop at the end of the row and he woke up as the tractor was going through the fence and into the ditch

Now, he didn't say but I bet he had been having a pretty good time the night before to be able to fall asleep running that tractor. It all turned out in the end. He went on to design the can for Pringles chips

Nice little tractor. I like it.
In the middle of every difficulty lies opportunity. - Albert Einstein

Great story Doug. My youngest son is quite attached to the LA while the other three are still reserving space in their heart for another Cub. We all have fun taking rides around the neighborhood in the wagon.

Part of life is falling down, living is getting back up.
Top

Joe Malinowski wrote:I have a 1942 in pieces right now its been in the family for over 60 years.

Been in pieces, since you've owned it, Joe! Ed

Member of Chapter 18, and National

whew I sure hate the little fart motors Junk Deere put on those L`s and LA`s
Josh Blair in Mt.Pleasant TN

Wayne, great video. Looks like he is having a good time. I have no such implements at this moment but if we keep this tractor long term, I will look for a plow.

Ed, you need to help Joe put it back together!

Bill E Bob, I am not sure my 5 year old son will let me trade the LA. We have only had it for a couple of months so time will tell. We will still have our sites on another Cub Loboy in the future. Would love to have both a Cub and be able to keep the LA but that may not be feasible.

Josh, I am no JD guy or expert for that matter. From what I have read and understand, the LA has a fairly large bore and stroke with a displacement of 77ci. I think in its day, it was a very capable and reliable machine. For a small tractor it it heavy at 2200LBS and has a lot of pulling capacity.

I'm with Billy on this one, sure would like to do some swappin if I had a low boy since I've always wanted a LA..
Very nice JD you have there.

Democracy is two wolves and a lamb voting on what to have for lunch. Liberty is a well-armed lamb contesting the vote.
Ben Franklin
Top

Virginia Mike wrote:Purdy! Electrics are over rated, and probably a fad.

Hope BillyRay or Roy doesn't see this, but I like all the "small" ones of all makes. I would love to have a LA, Pony and G as well. Great looking tractor you got there!
Screwstick #3934
FCub - LoBoy - Numbered Series - Power Unit Databases
Top

Paul, just send me a PM when you find the right Low Boy those kids are looking for.

Democracy is two wolves and a lamb voting on what to have for lunch. Liberty is a well-armed lamb contesting the vote.
Ben Franklin
Top
23 posts