Well the 100 restoration is complete, well technically not as still have to do the springs for the trip blade but its close enough!! 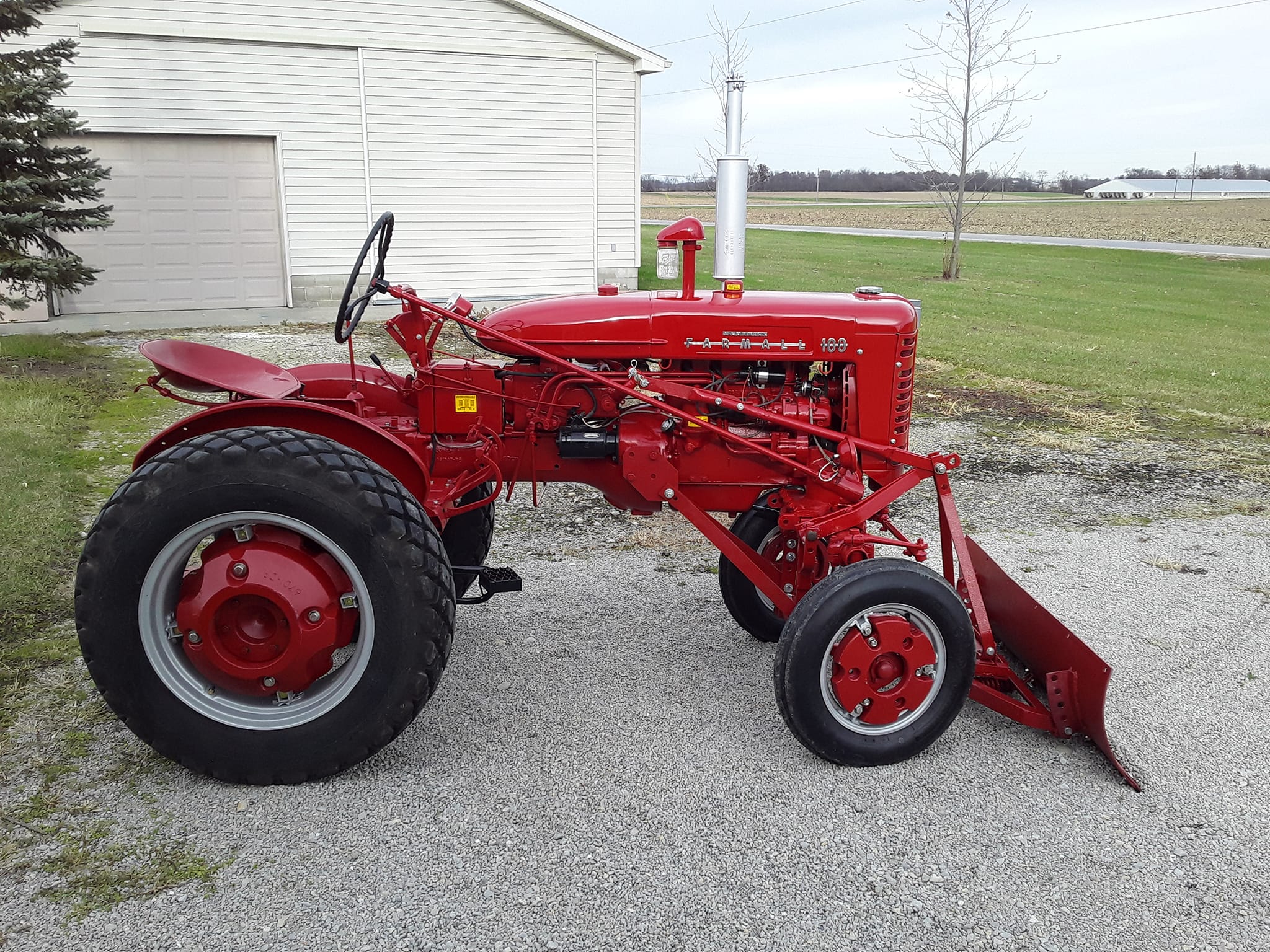 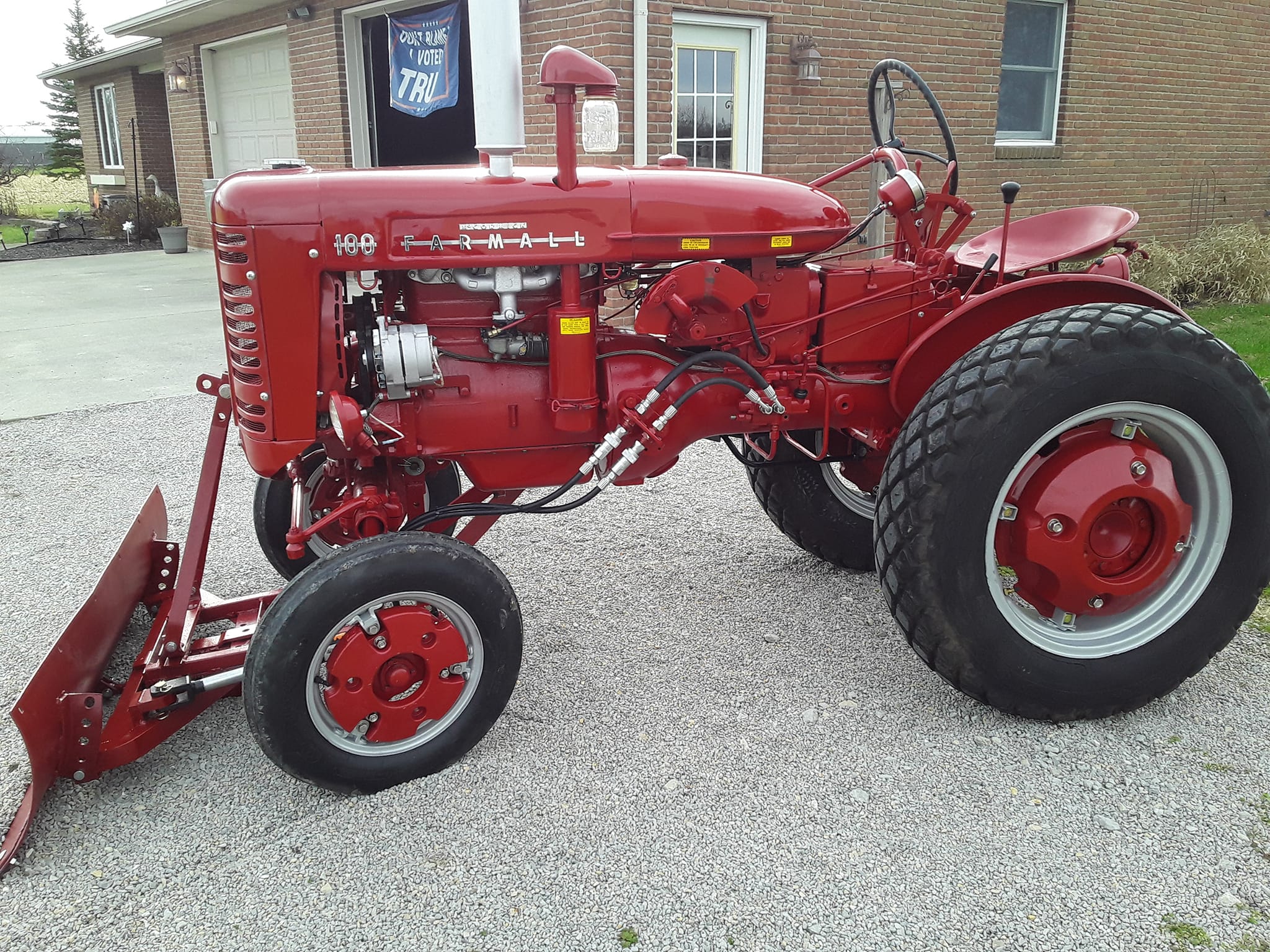 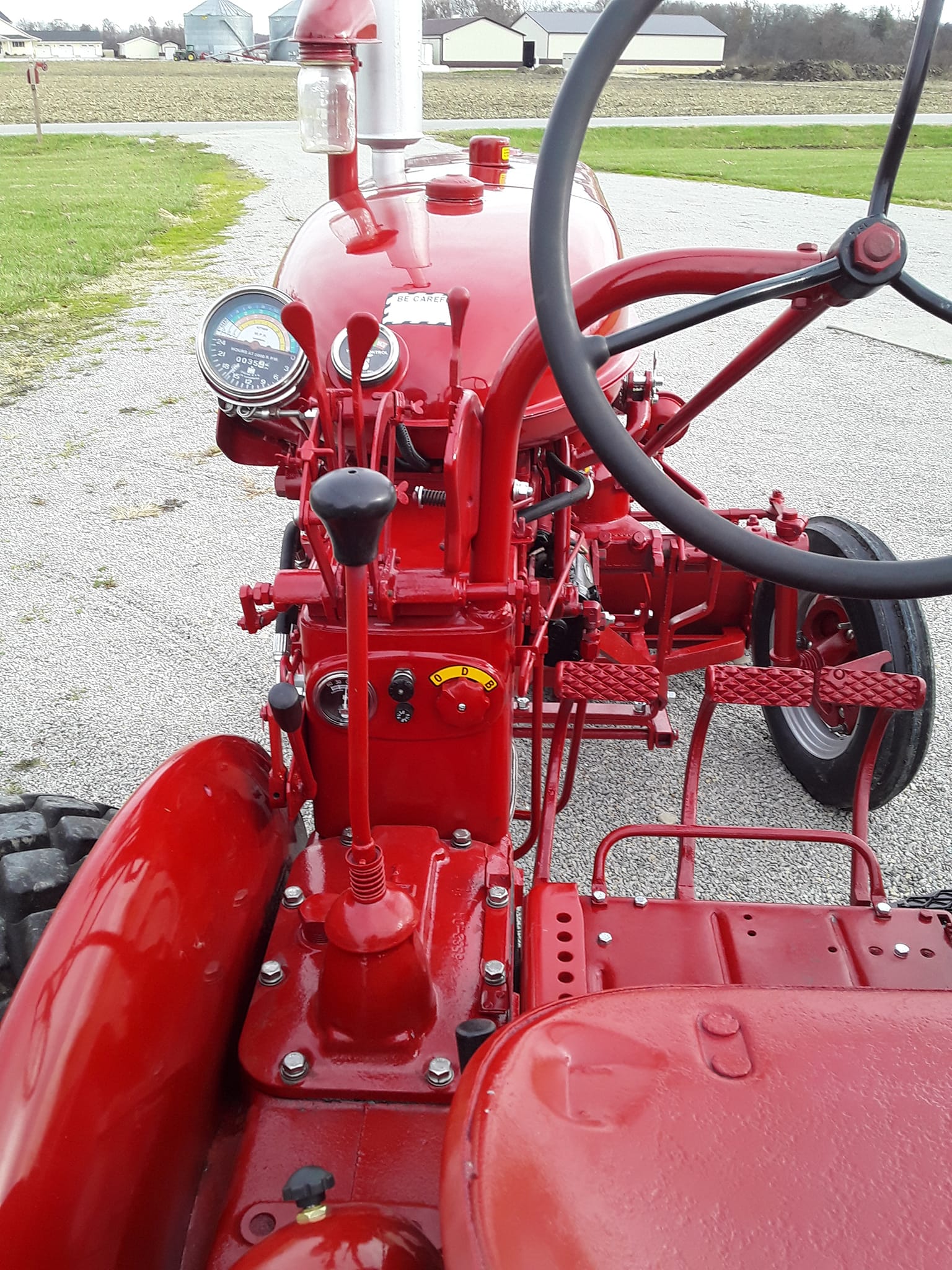 We were going to place the valve behind the gear shift but that was going to causes us to do some complicated compound angles on the piping. So as you can see and I showed previously we hung the valve on the side and brought the feed valves underneath. Then we ran hose to a plate where we mounted the quick connects.

For the control linkage we attached a piece of plate through the pop out holes on the side of the control panel, then put the lever there with the control linkeage back to the valve. After it is all said and done I like the control rod there as it is out of the way.

I have a new plate coming from Nancy D., it should be here in a couple weeks.

All I need to do is drill the holes in the frame for the eye hooks and then attach the springs. But that will have to wait till I get them ordered from McMaster Carr. 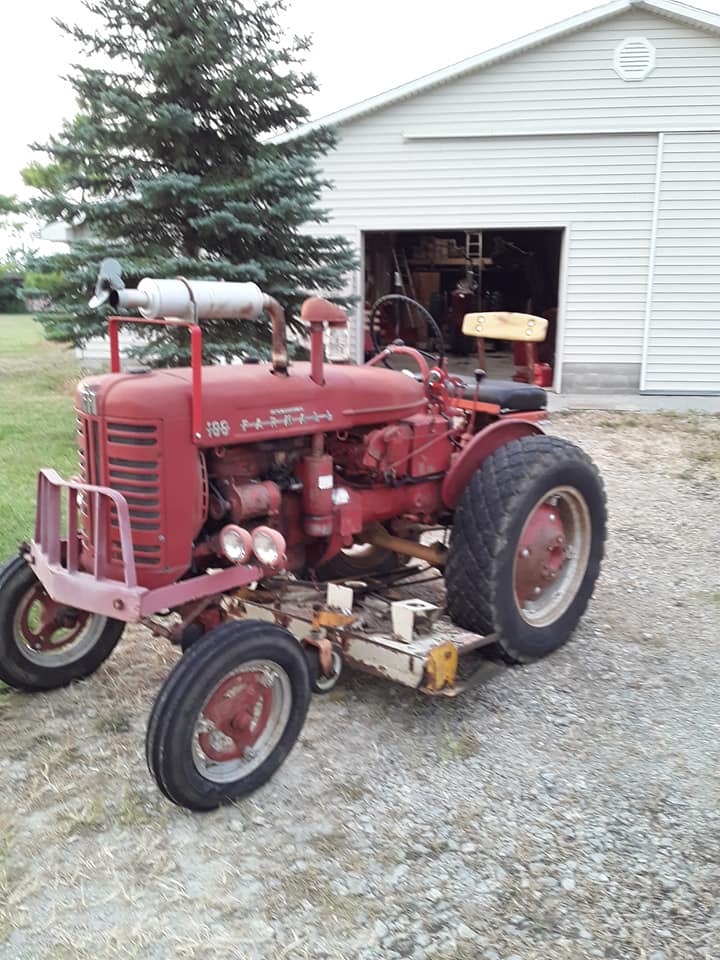 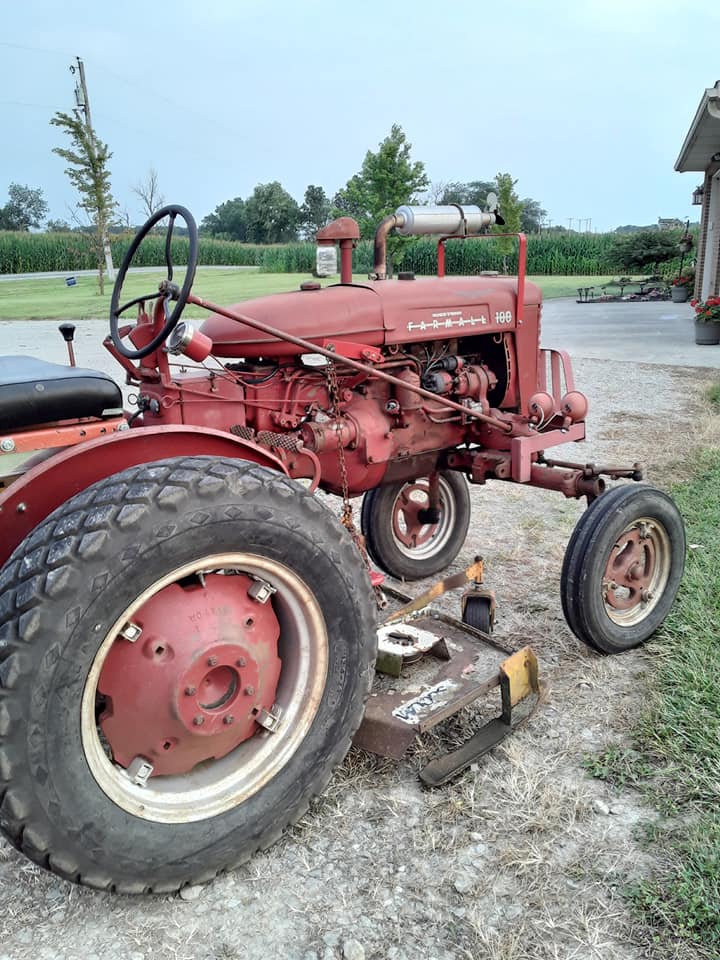 Now that is one fine looking machine! Well done!

I like the idea of using bulkhead fittings to support the quick disconnects.

I really like that deep, rich shade of red!

really nice job. What did you do with the stainless badges? They really pop.
When you only have 9 horsepower you need to know the names of all of the ponies!
Top

inairam wrote:really nice job. What did you do with the stainless badges? They really pop.

I do some gunsmithing so I polished them with my Brownells polishing compound (Black/Gray/White). Not sure what the grit is on the white but you can see your reflection in them.
Shawn Agne
Top

Can you post more pic of the auxiliary hydraulics - The transfer from the tc to the other side and the third function valve?

That really looks professional.
When you only have 9 horsepower you need to know the names of all of the ponies!
Top

inairam wrote:Can you post more pic of the auxiliary hydraulics - The transfer from the tc to the other side and the third function valve?

Thanks the hardest part was trying to decide how to do it as I didn't see anyone whose done this with a SA-140 yet. With the hydraulics on the same side as the clutch there wasn't a lot of room to route it back along the frame and to the valve mounted behind the gear shift like you do with a Cub so we decided to route the tubing under the frame. For the Cub position I had a plate made and it was going to take a lot of compound bends on the tubbing and with the size tubbing laying around we didn't think we could bend it tight enough. 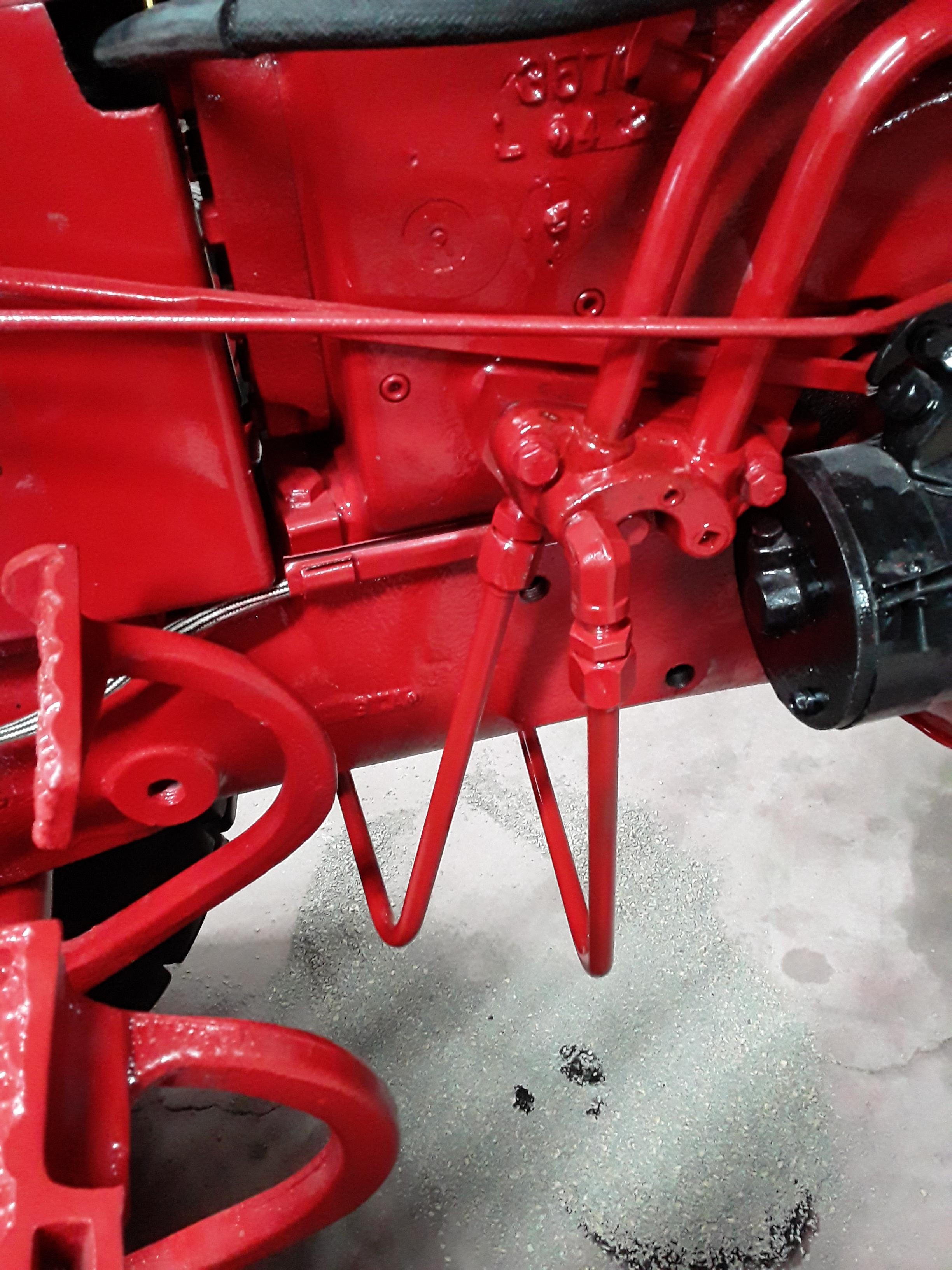 The tubs coming off the drivers side are oriented in such a way that they don't interfere with the clutch.

We mounted the auxiliary valve on the other side on the mounting point on the frame. 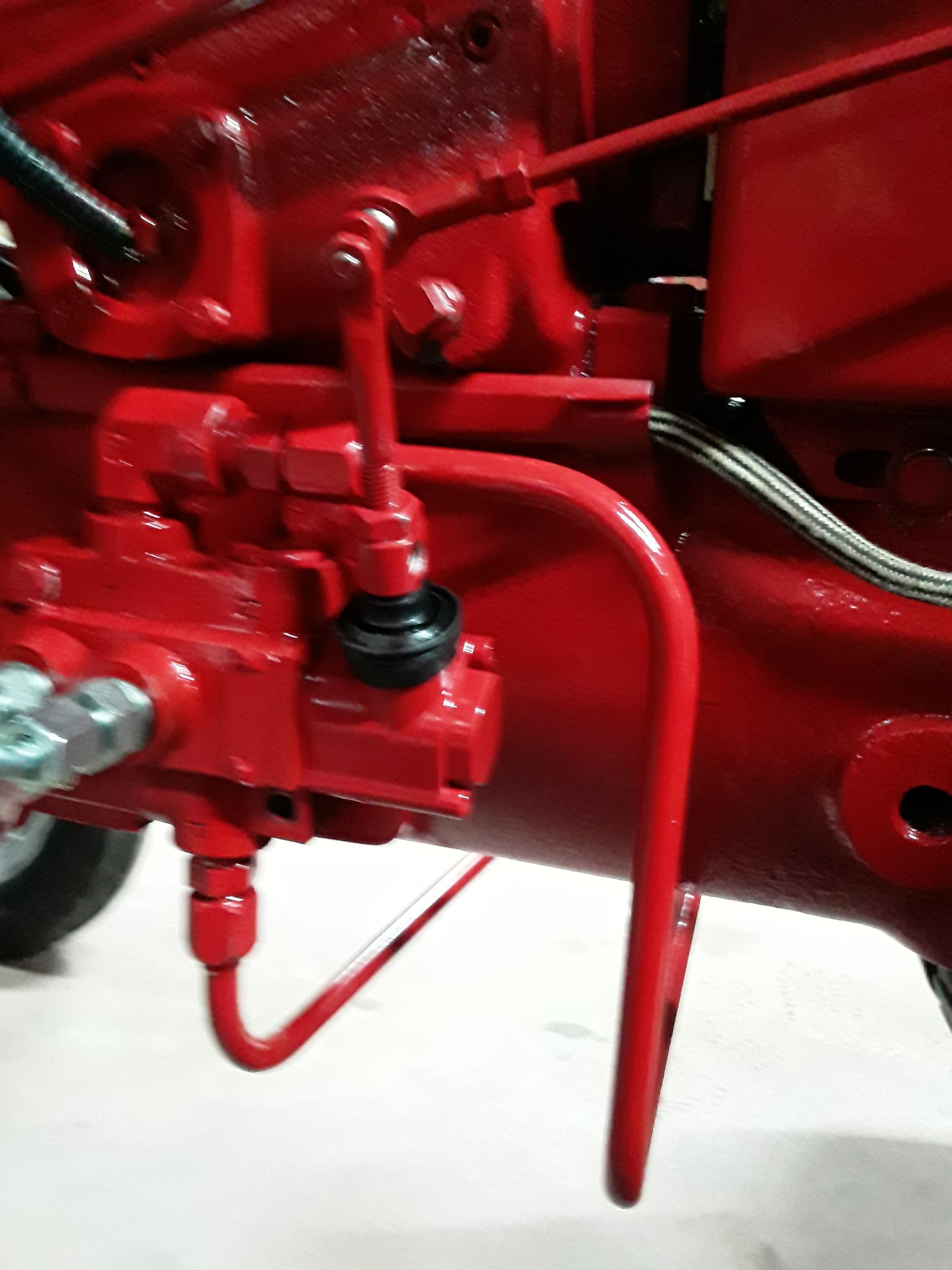 In order to control the valve we used the punch-out holes on the side of the console and then welded the valve control to a pivot and then made an arm to connect to the linkage for the valve. We used a set screw so we could set where we wanted neutral. 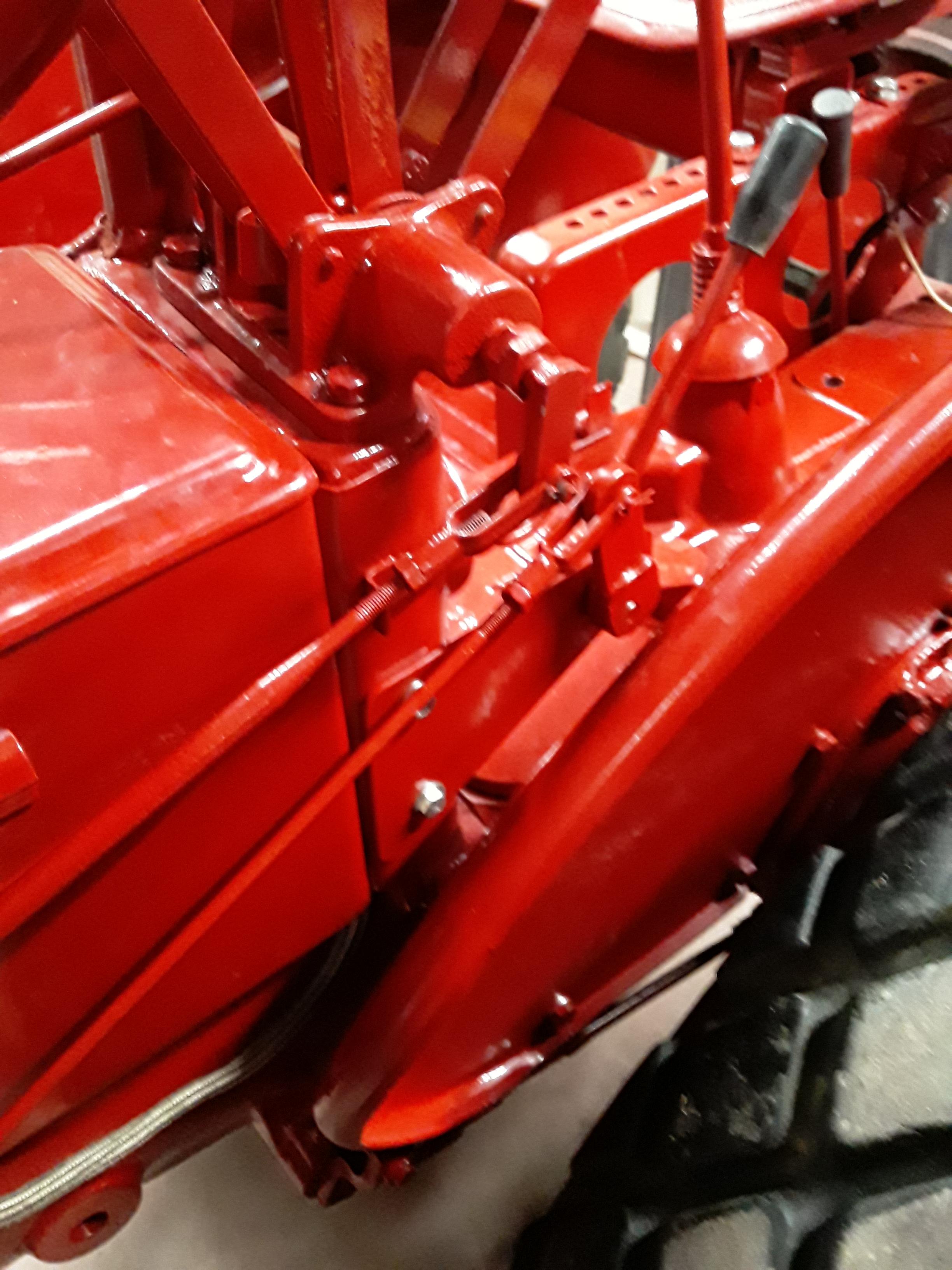 Going from the valve to the remote cylinder we ran it through the bulkhead mounts as previously mentioned. I wanted something sturdy yet "IF" I have had to split the tractor I wanted something flexible so it could be moved easily to get to the mounting point for a stand. 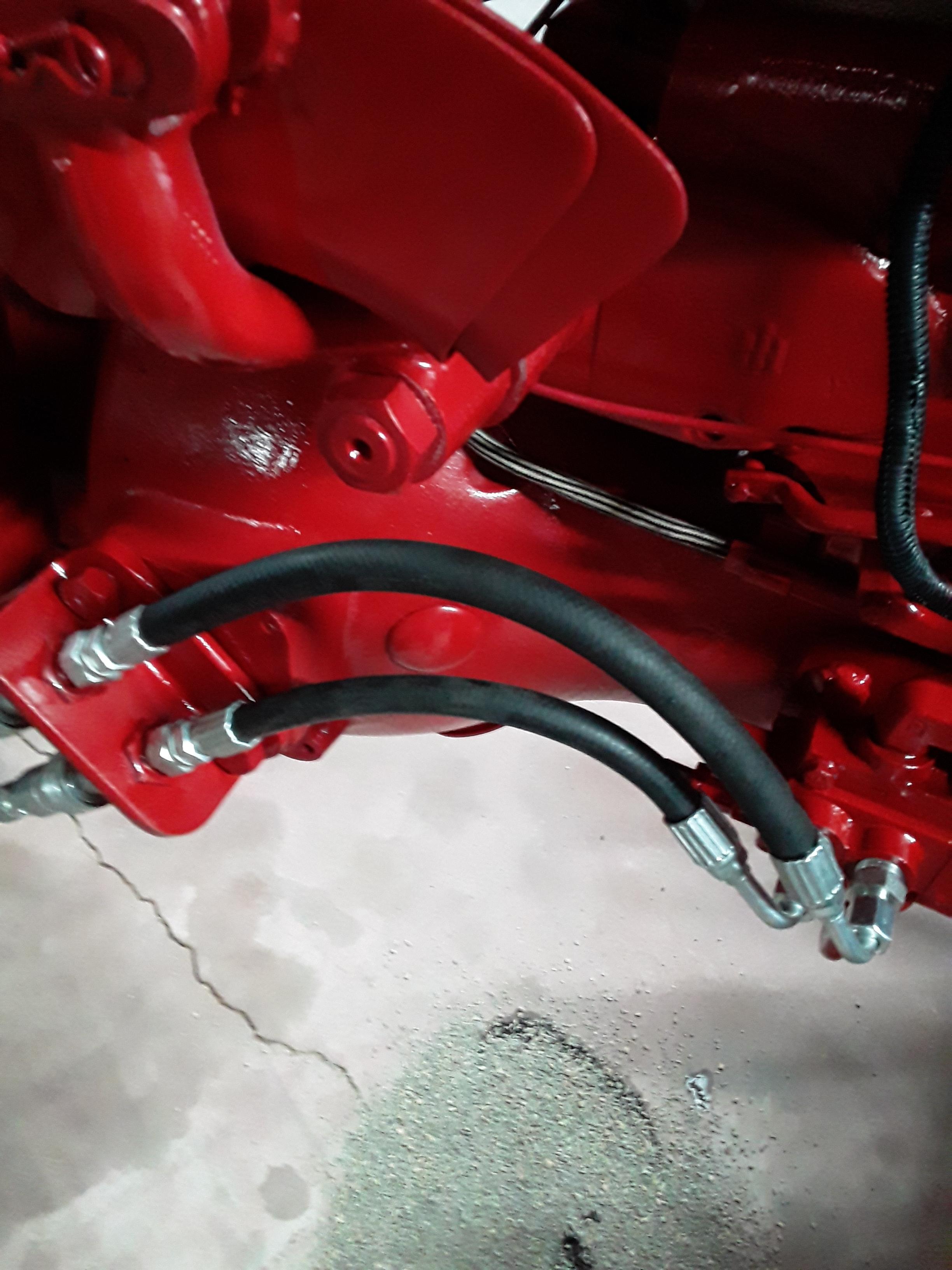 Then from there we just ran the hose down to the cylinder. its under enough tension that it isn't going to move. However you could use a coat hanger or something to hold it back so it doesn't get the wheel. 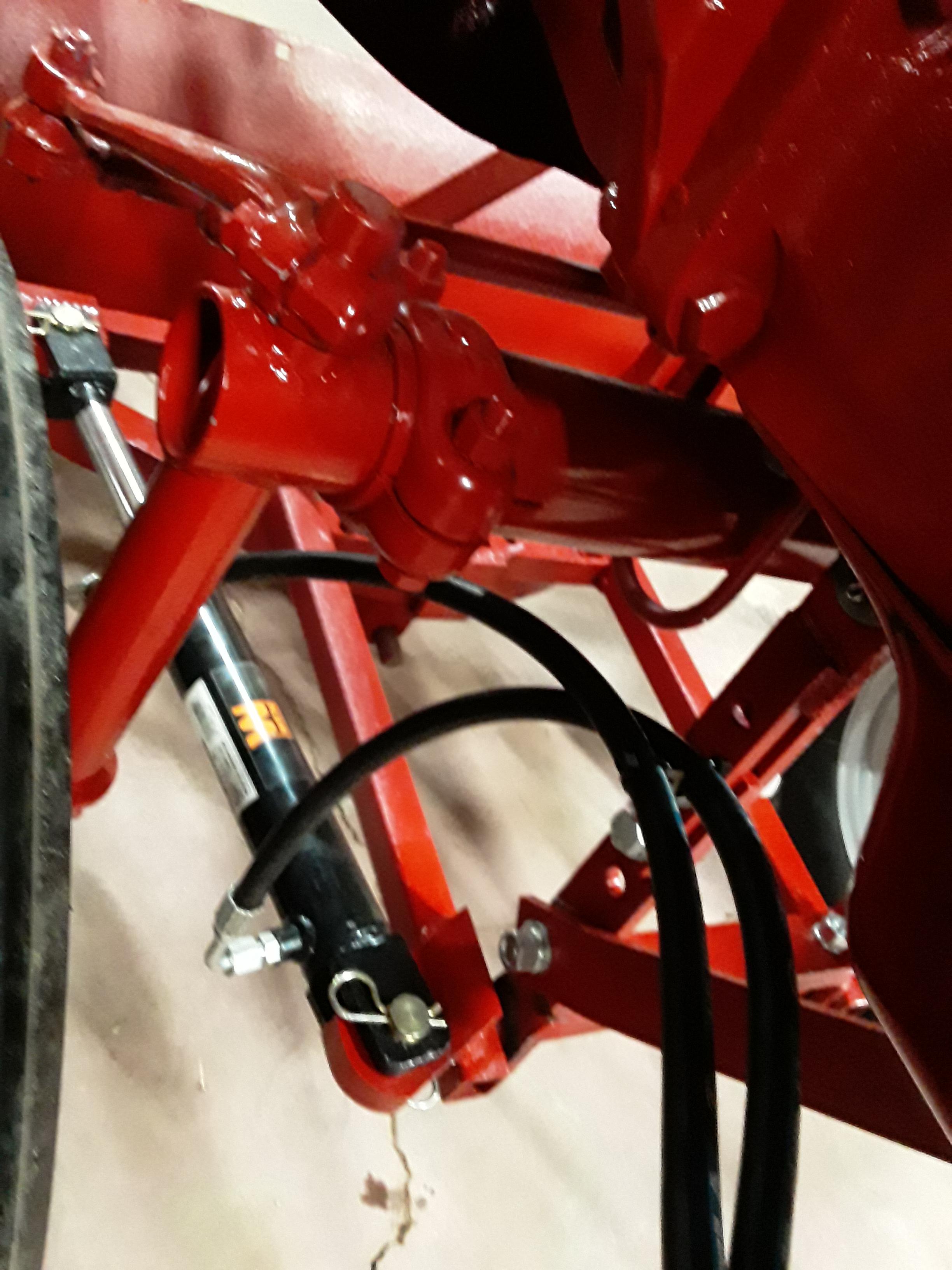 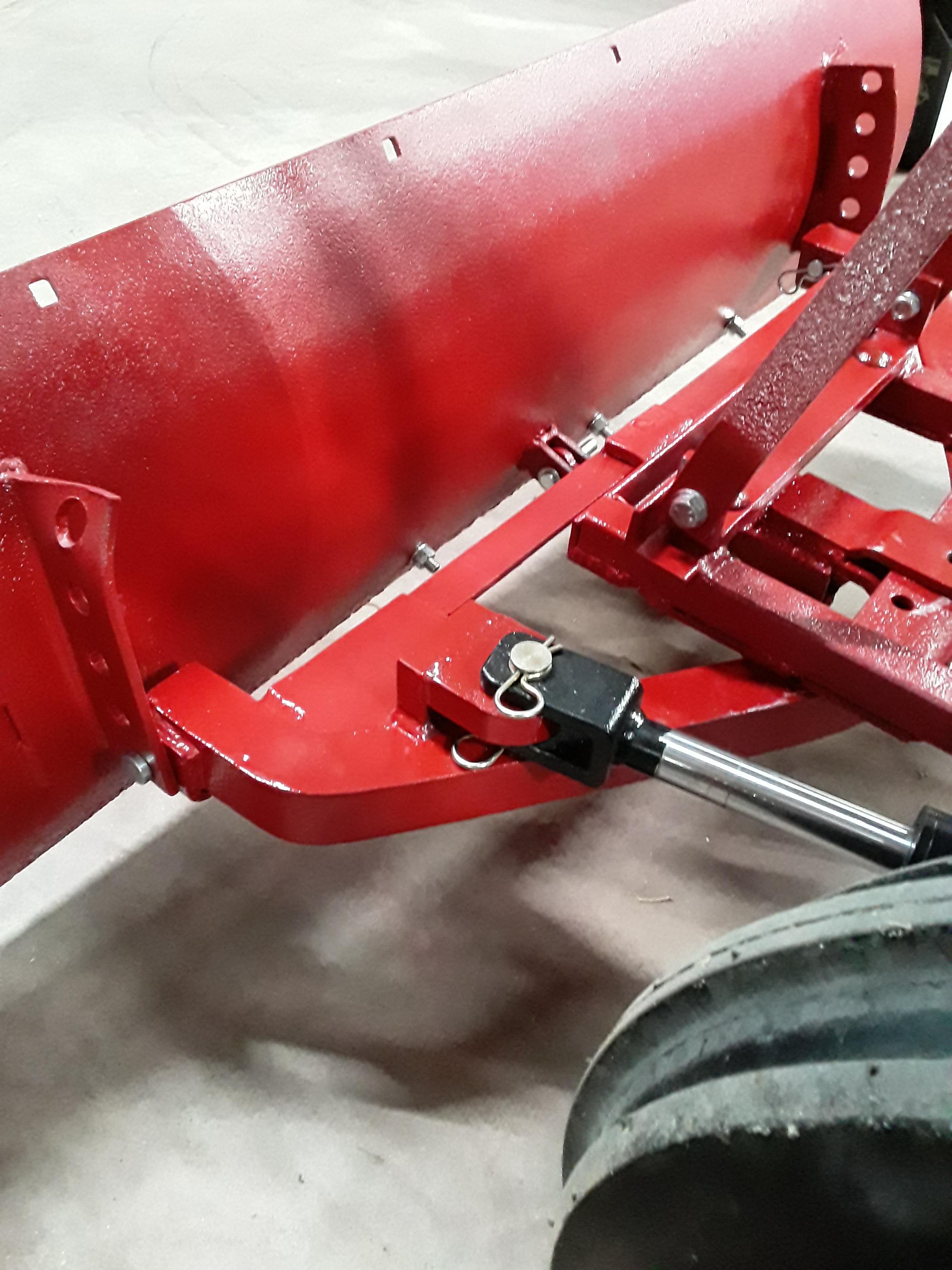 What I may end up doing later is welding on some plate on the other side to balance it out a little as this setup along with the standard A54 setup is heavy to the cylinder side.

The only other thing I have to do, and working on this as soon as I get the wood shop part of the barn cleaned up is add the stuff for the trip blade. The middle set of holes line up right where the bend starts on the frame so just have to drill the holes there and mount the eye brackets. I'll post those pics once I get the springs installed.
Shawn Agne
Top

How far do you have to reach to use that aux hydraulic valve? It looks uncomfortably far!

Someone just had the factory aux hydraulic valve set-up for sale in the vine, and it sold pretty quickly.
http://farmallcub.com/phpBB2/viewtopic.php?f=20&t=110438&sid=d56ca9dabdb9fa735ab15a37faa4a128

SamsFarm wrote:How far do you have to reach to use that aux hydraulic valve? It looks uncomfortably far!

The actuator handle is located between the shift lever and factory TC levers. Looks convenient and accessible to me.
1929 Farmall Regular
1935 John Deere B
1937 John Deere A
1941 John Deere H
1952 John Deere B
1953 Farmall Cub
Top

How far do you have to reach to use that aux hydraulic valve? It looks uncomfortably far!

Someone just had the factory aux hydraulic valve set-up for sale in the vine, and it sold pretty quickly.

Where the valve is originally located yes it would have been impossible to reach from the seat. The actual operating valve is just below the touch control quadrant by the choke so it is VERY easy to reach while sitting on the seat. It is just left of the Amp gauge. Picture also shows how the clutch fits in between the two lines coming off the driver side at the block.

If you look at the valve picture you will see the linkage. What we did was took a bolt and then heated the head and pounded it flat so we could then tap it for the hyme joint. From there we had a piece of 1/4" rod we threaded and screwed it into the hyme joint on one end and clevis on the other. Took some plate and cut it in a triangle shape and mounted it to the console through the punch out holes. Then we turned a steel pushing on the other end of the plate and used a 1/2" pin as the rotational device. The left side we cut a steel tab and then drilled and threaded it for a set screw to attach to the pin, with a steel tab welded on it for the clevis to attach to. The other side we welded the control level to a nut and then attached that to the pin.

Since we have a set screw on it we were able to set where we wanted neutral position to be we have it probably 50 degrees or so up from horizontal this gives full deflection with the lever being vertical to almost horizontal.

There isn't much room between the console and the fender but it fits.
Shawn Agne
Top

Looks absolutely wonderful! That’s a machine to be proud of.
Top
18 posts