Got a project that you are working on that is not a tractor? Maybe a barn to hold your tractors or just fun stuff like woodworking, glass, tools, sheds, gardens, custom implements, etc., this is the place to talk about it.

Dale Finch wrote:NO, NO, NO!!! I have first dibs on Lt. Mike's clearing skills!!!! My place next!

He'll have to try to make it through Virginia before he gets to North Carolina...... Lol
Bill Longeill
Top

Update on the home electrical saga

After correcting some very questionable wiring done by the prior own of my home I was sure that I got it. Two weeks went by and no issues.
Great... nope. Sunday night the power flickered on 2 circuits, went out and this time stayed out.
Bad but good as it let me do a better diagnostic check. Checking my breaker box again I found that every other breaker was dead, the ones that clamped to the left rail. Checking the lines in from the street I found that one of the two hot leads/ phases was dead.
Bang ! There it is!

After an hour the line regained power again but too late I had finally found the culprit!!!
At about 1am it went out again and stayed off till 6am.
In the morning I called an electrician who said he could charge me a $175 service call to tell me what I already knew but said get with the power company. I did and they were there in a half hour.
He shook all the wires and couldn’t recreate the problem. He suggested my main breaker was bad but I showed him on my panel where I tested the wire itself and he agreed the problem was outside and went out to double check all the connections.
Starting at the house all seemed good but at the pole he found that one of the wires had a really “iffy” connection with fried jacketing. This was cut back and recrimped. He said he was sure I had an issue and was frustrated himself until he found that connection and concluded that was it. He also noted a large broken branch (12” thick) that looked like it had fallen on the wire. I said it had bounced off the wire In a storm a year ago and I had called them to check the wire. A guy came out, looked at it and said yup that’s a branch, that’s a wire your good have a nice day.

I saw the jacketing he stripped off and it really was fried. This was the “well there’s your problem” moment. It all makes sense now that the breakers didn’t blow in my panel because the problem was at the street and not in my house.
I feel much better now.
Also it did lead me to find and correct some questionable stuff so I guess there’s a reason why everything happens the way it does.
Later this year when the world normalizes I’m going to have the electrician upgrade my panel to present day code and add a transfer switch for a new dual fuel generator (9400 peak, 7500 running watts) I just bought from Costco.
Time for some peace of mind.
Quote by Gary Pickeral I like
"If it can cast a shadow, it can be restored"
Top

outdoors4evr wrote:Tell us about the dual fuel generator! What two fuels does it take? Propane or Natural Gas and Gasoline?
I've heard that running off propane reduces output performance.

I’ve been on the lookout for a generator since Hurricane Sandy knocked our power out for nearly two weeks. During that time gasoline supplies ran out. I saw it coming though and filled every tractor, every boat, every vehicle and gas can, anything that could hold gas before it hit. That and FEMA filling my pickups tank (being a first responder) got me through it with my little Coleman generator.
Here are the reasons I went with a dual fuel unit.
I saw that while gasoline wasn’t available propane was.
Propane can be stored indefinitely without its souring too. If the generator is run on propane it doesn’t foul the carb from storage between uses.
If I run gas through it I’ll mix marvel mystery oil in the gas then drain the bowl after use. That has worked well for me in the past.
Your right about a performance drop when running propane. Running on gas it’s rated at 9400 peak watts, 7500 running watts.
Running on propane it’s 8450 peak and 6750 running watts.
I will have a transfer switch installed into the panel which will cost about $400-$500 over the cost of a panel upgrade I’ve also got planned ($1,600 for that alone).
A friend told me about a cheap alternative back feeding power through the drier outlet but there’s enormous risk in that I’m not willing to take.
This thing is on wheels and it’s a good thing because it’s big and weighs a ton!
When the need arises I will wheel it out of storage in the garage around to the meter and plug it in, go to the panel switch the transfer switch from line to generator, turn off nonessential breakers and go start the generator which had an electric start. Guess I’ll need to keep its battery on a battery tender.
I’ve been pricing them since Sandy and it’s hard to find them under $1,000. I saw it at Costco while shopping for pandemic supplies and they had it on sale for $599 from $699.
I figured it was time to jump.
Won’t miss putting my shoulder out pulling that cord on the Coleman, filling it with gas ever 1-1/2 hrs ( this runs for 12 hrs), or tripping over extension cords.
It’s off sale now but keep an eye out it’s bound to go in sale again.

https://www.firmanpowerequipment.com/sh ... -electric/
Quote by Gary Pickeral I like
"If it can cast a shadow, it can be restored"
Top

....When the need arises I will wheel it out of storage in the garage around to the meter and plug it in, go to the panel switch the transfer switch from line to generator, turn off nonessential breakers and go start the generator which had an electric start. Guess I’ll need to keep its battery on a battery tender.

Mike,
I would reverse the order of how you do this so the generator can get up and running, smoothed out, etc. before putting a load on it.
Also, not sure what transfer switch you're getting, but with the GenTran unit I installed, the circuits I want to power off the generator are wired through the transfer switch then to the breaker.
I wheel my generator out of the garage, start it up, plug in a 10' cord that goes into a junction box and is hardwired back to the transfer switch, walk down the stairs into the basement and flip each of the circuits on the transfer switch to generator from line. I allow each circuit to load the generator with the input voltage required to run the appliance/lighting on that circuit before flipping the next switch otherwise the voltage drop is significant.
Circuit 1 = furnace
Circuit 2 = refrigerator
Circuit 3&4 (paired) = well pump
Circuit 5 = some 1st floor lighting
Circuit 6 = some kitchen outlets 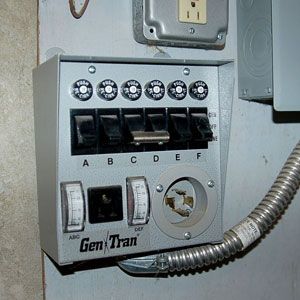 Depending on the transfer switch I choose it can cost from $400-$1,400.
With a basic set up it can interrupt the power to the pole replacing it with generator power.
Kill all the main panel breakers and turn on only the essentials in order as marked in color coding and numbered on the panel.
That would also allow me to divert power to a nonessential circuit like my barn/shop if I need to do service work. If that wasn’t an option on the generator I guarantee Murphy’s law would cause something to breakdown and I’d need my shop.
Also we have small things like fish aquariums in different rooms that’d need power. They could be the only thing drawing power on those circuits.
We would need to prioritize and maintain discipline in power use for sure.
One other thing on generator power is that unless it’s an inverter generator like the super expensive Honda’s the power produced is not “clean”.
Some appliances like smart refrigerators and computers can be damaged by the spikes they can produce. Some things you take a risk with but I wouldn’t suggest running a computer on generator power.
What sized generator are you using?
Quote by Gary Pickeral I like
"If it can cast a shadow, it can be restored"
Top

I have a 5,000 watt Coleman with a 7hp B&S OHV engine.
Not big enough but it was all that was available when I bought it.
Yes, the “dirty” power is an issue. I need to monitor load. If we lose power in the winter, the furnace has priority over the fridge. If the well is going to be pumping water I’ll flip the fridge and furnace off.
Had to have the furnace control replaced a few years ago. The tech seemed to think it went due to brownouts or generator power.
Computer gets shutdown and doesn’t get turned on until line power is restored. Unplug the TV.
If we’re out for an extended period of time I’ll run an extension cord to the freezer in the basement and run it by itself for a few hours.
Sure would like a bigger generator!
1957 Farmall Cub "Emory", Fast-Hitch, L-F194 Plow & Colter, L-38 Disc Harrow, Cub-54A Blade, Cub-22 Sickle Bar Mower, IH 100 Blade

Another thing for your wish list is a woodstove.
A week into our power failure after Sandy hit we got hammered again with a nor’easter snowstorm.
It was like a one two punch. We had our woodstove cranked up and it kept the house toasty warm. Ours is an old Upland 207 but doesn’t have the glass door so we can’t see and enjoy the firelight. It does a really good job warming the house but I’d love to find the retrofit glass door for it.
Wait for Costco to run another sale and give a woodstove a thought.

Quote by Gary Pickeral I like
"If it can cast a shadow, it can be restored"
Top