The new home for CubFest and Tractor show Announcements & Discussions.

Forum rules
ALL CubFest discussion posted in other forums will be moved to this forum without advance notice.

IMPORTANT NOTE: CubFest organizers -- Notify a TeamCub member or the ADMIN (Dennis) to "Sticky" your event announcement in this forum.
16 posts

Who has what that needs work. Looking for projects for the Bash. 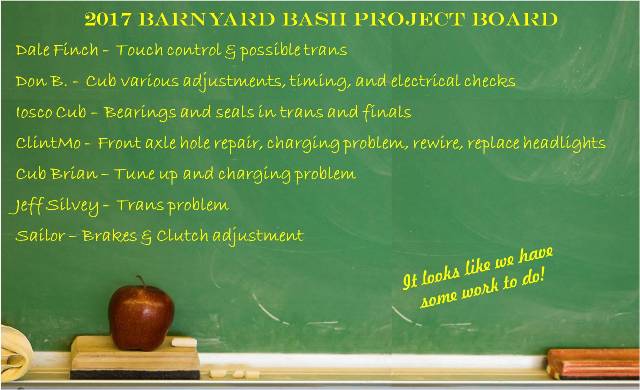 There are two ways to get enough Cubs. One is to continue to accumulate more and more. The other is to desire less.
http://www.cubfest.com
http://www.barnyardbash.com - http://www.savethecub.com

Touch control, and MAYBE a transmission (off tractor - for the spares shelf!) Thanks!
Dale Finch
'56 Cub Restoration

I am bringing my recently reassembled '48 to see if we can get it going.
I expect it to include various adjustments, timing, and electrical checks.
Hopefully, it will be a reasonably painless project, but you never know.

I'm leaning towards bringing my '55. It needs a lot, but to start with, some of the pin holes on the extensions of the front axle are wallered out and I was hoping to address that. Next, it isn't charging so I'd like to get to the bottom of that. I would also like to rewire it and remove the old smashed up headlights and install new aftermarket ones. If I get all that done I'll keep going and do whatever else I can.
Top

I plan on bringing my 57 cub. It hasn't ran in several years so it needs a tune-up and it wouldn't charge the battery if I remember correctly.
Brian
Top

I don't plan on bringing anything. (except food) I'll be there to help, and offer moral support... hehe
Top

Bill put me down on tranny problem.
In my line of work
" EVERYBODY GOES HOME THE NEXT MORNING"
Top

I am trying to decide whether or not to bring a cub or 2 to the Bash. I now have all 3 of my cubs down:

Bertha '55 - just closing her up after replacing the rear engine seal among other maintenance items, so hopefully she will be back to cutting grass this week.

Ben '55 - my sister was mowing with him last week, and realized, when restarting after a lunch break, that the hydraulics had quit. She wasn't sure when this happened, since she wasn't adjusting the height toward the end. Fluid level was fine. I figured the nut and gear had come off the pump, so took it off only to find it was fine. Turned the gear and it SOUNDED like it was pumping. Put it back on, added fluid, but nothing. And I mean nothing! No indication things were even connected! Lever moved stop to stop with no movement or resistance at all. Unfortunately, I don't have an extra pump to swap out to diagnose whether tbe problem is with the pump or block. ???

Boris '56 - the latest in the flock...still putting him together after purchase last year. Having trouble with shifting without grinding, so adjusted the fingers and pedal freeplay, but still grinds. Next step will be to park it "downhill" (front wheels in a ditch!) and spray lubricant down shaft in an attempt to lube the pilot bushing. He is also running "rough". Checked plug wires in correct order, points gapped correctly...next thought is to check the valves to see if something is stuck. ???

I had originally planned on only bringing a touch control block to rebuild. Now I'm considering bringing Ben and/or Boris. With all the "experts" at the Bash, it would be a huge opportunity to get these 2 out on the 8 acres mowing. Figure I can either rebuild the TC here at home, or bring it and rebuild it if it turns out Ben needs a "new" TC.

Would it be OK if I did bring one or both? I am fine taking things apart and fixing them, but not so good at diagnosing problems.
Dale Finch
'56 Cub Restoration

Dale Finch wrote:Would it be OK if I did bring one or both? I am fine taking things apart and fixing them, but not so good at diagnosing problems.

That is what a CubFest is about. We can give you one bay to get started.
There are two ways to get enough Cubs. One is to continue to accumulate more and more. The other is to desire less.
http://www.cubfest.com
http://www.barnyardbash.com - http://www.savethecub.com

Dale Finch wrote:Would it be OK if I did bring one or both? I am fine taking things apart and fixing them, but not so good at diagnosing problems.

That is what a CubFest is about. We can give you one bay to get started.

Thanks, Bill!
Now I need my old brain to switch gears from:
2011 Acura with all the bells and whistles to 1990 F250 with...zip!
Nothing in tow except a TC Block in back to 18' trailer with two cubs
A couple tubs of supplies for TC rebuild to a truck piled with supplies
A relaxing day here at the farm to loading the 2 cubs and "stuff"!!

Oh, man! I'm exhausted just thinking about it...think it's time for another

Leave it to me to change my mind...again! A radiator issue developed with the F250, so I will NOT be bringing any tractors...only the touch control to rebuild. I do prefer the KISS principle anyway! Also, with the NC Cubfest, Cubolina, in only 2 weeks, I can take them there, for a fraction of the hassle and expense.

I will be driving the Acura for comfort and convenience, even though it gets lousy mileage (15mpg!) See everyone soon!

I know!! It sucks! Oh well, it's comfortable, reliable, has a good sound system and with the nav system, I can always find a Starbucks, McDonalds or Tractor Supply!!