The Cub Club -- Questions and answers to all of your Cub related issues.
Forum rules
Notice: For sale and wanted posts are not allowed in this forum. Please use our free classifieds or one of our site sponsors for your tractor and parts needs.
18 posts

Hello All,
Might not be all that interesting to some, but I guess I am looking to start a discussion on the cub trailer. Some might say I get caught up in details, but that is just me. When I get asked questions at shows with our display I like to have some decent answers.

So I will have some questions, and share what info I have come across. I have looked at past posts, but the main thing I like is pictures, of tags, decals etc, to see the variations of the trailer, but many pics don’t work anymore. I will post some pics of my trailers and pics of different pages of information, but the they might be out of order and on reply pages lower as I think I can only show 6 per posting.
Please don’t take anything I type as being snarky or “know it all” I am just putting stuff out there for whoever might care. What I hate about online reading and discussions is you can’t hear the other persons tone.

Well to start there is no Cub Carts, that is just slang, one will not find that in any parts book or literature. I might refer to that phase here but that is from habit as that is what we call the one we use.
Now I am wondering where do the models 528, 628, and 629 come from? I have read here that they refer to them on this site as 6 foot boxes and 7 foot boxes. I cannot find them in any other source on the web or in parts books manuals that I have looked at. I would like to see pictures of any tags decals etc.
Now from what I have been able to decipher there is no actual models of 528 628 629. Unless they are later and under a lawn and garden? I don’t know about this? The later production trailers are the No. “10 Utility Trailer” which differ from the earlier trailers.
There is a neat book on the Wisconsin historical site, Machine Product List, put out by International Harvester in1980. For some reason I could not find the #10 in the list, but it shows two different Cub two wheel trailers.
Now lest say you wanted one at the beginning of production, which the earliest I have seen dates for is 1949, but I believe main production started in 1950. You ordered, “Cub Two-Wheel Farm Trailer” That IS the model you order thru 1961. Then in 1962 till ???? you ordered the “ McCormick International 10 Utility Farm Trailer” I think this were some get confused because they don’t see an actual model “number” which they did not have.

The owner’s manuals I have seen do state in the specifications that the trailer box is 4 feet x 6 feet x 12 in. deep. I believe this is a very early production trailer and very scarce, you that have one are very fortunate. All later ones are 4 x 7 feet.

I also have a book on products from the individual works from 1949. It has the cart listed under the McCormick works product, as the “Cub Two-Wheel Farm Trailer” kind of neat that it has the telegraph code for ordering the trailer. No mention of box sizes though.
So at one point production of these shifted from the McCormick Works in Chicago to the Memphis in Tennessee. That is where the 10 trailer was at as well.
Well this turned into a rather long rambling for me.
I hope some will find some use out of this.
Respectfully yours,
Russel Foster
Top

Also still looking if anyone has seen this decal on the front of a trailer. The decals have been painted over. I need to measure this one but the bigger IH McCormick decal is above this one. I cannot make out what it might have said at all.

Then Some more cart pics

In my archives I have this photo of a model 528 with tag. I believe it might belong to someone on the forum.

I have 3 two wheel cub trailers and none have that decal on the front of it. Maybe a dealer installed decal?

Good stuff Russel. Keep in mind that the machine list on WHS is a later compilation. It seems to be one of the more error-prone IH documents. I have questioned some of the production numbers. Some of the years manufactured disagree with other sources. The factory listed with each machine is the responsible engineering center. This seems to usually be an accurate ID of the factory that built it, but may not always be. When a machine was moved to another factory, I'm not sure that the engineering center and actual production factory would have changed at the same time. And of course there is only one entry for a machine, even if it moved during production. A look at the F.O.B. point in your price lists can be revealing. Who was building trailers in Ft. Dodge Iowa?
Top

Sorry to come into this thread so late but I also am fascinated by the Farmall cub trailers and want to know everything about them. I have a 629 and an IH 10 cart. But I recently found a cart that has no sides, same dimensions 4x7, and it has a tag model 729 but I have never heard of this and can not find anything online about it. Does anyone know what this trailer is exactly?? I have pictures but I haven’t figured out how to attach them.
Top

I think this is that trailer?

Those are neat as a pin! They seem to be terribly scarce, I suspect that they lived a hard life.

It would be nice if a modern reproduction were available. I suppose it would have to be produced off shore to have any hope of being affordable.
Top

Thanks for all of the information Russel. I am intrigued by the Cub trailer also. Good to gather more information so we can compare notes. I have an early Cub farm trailer (can’t read the model number on the tag) and a #10 trailer. I think mine are both 4 x 7.
Frank
Top

Mine is the one that was made for Sears for the Jeeps I think, isn't a dump bed. Friend runs a print shop and made the decals for me. 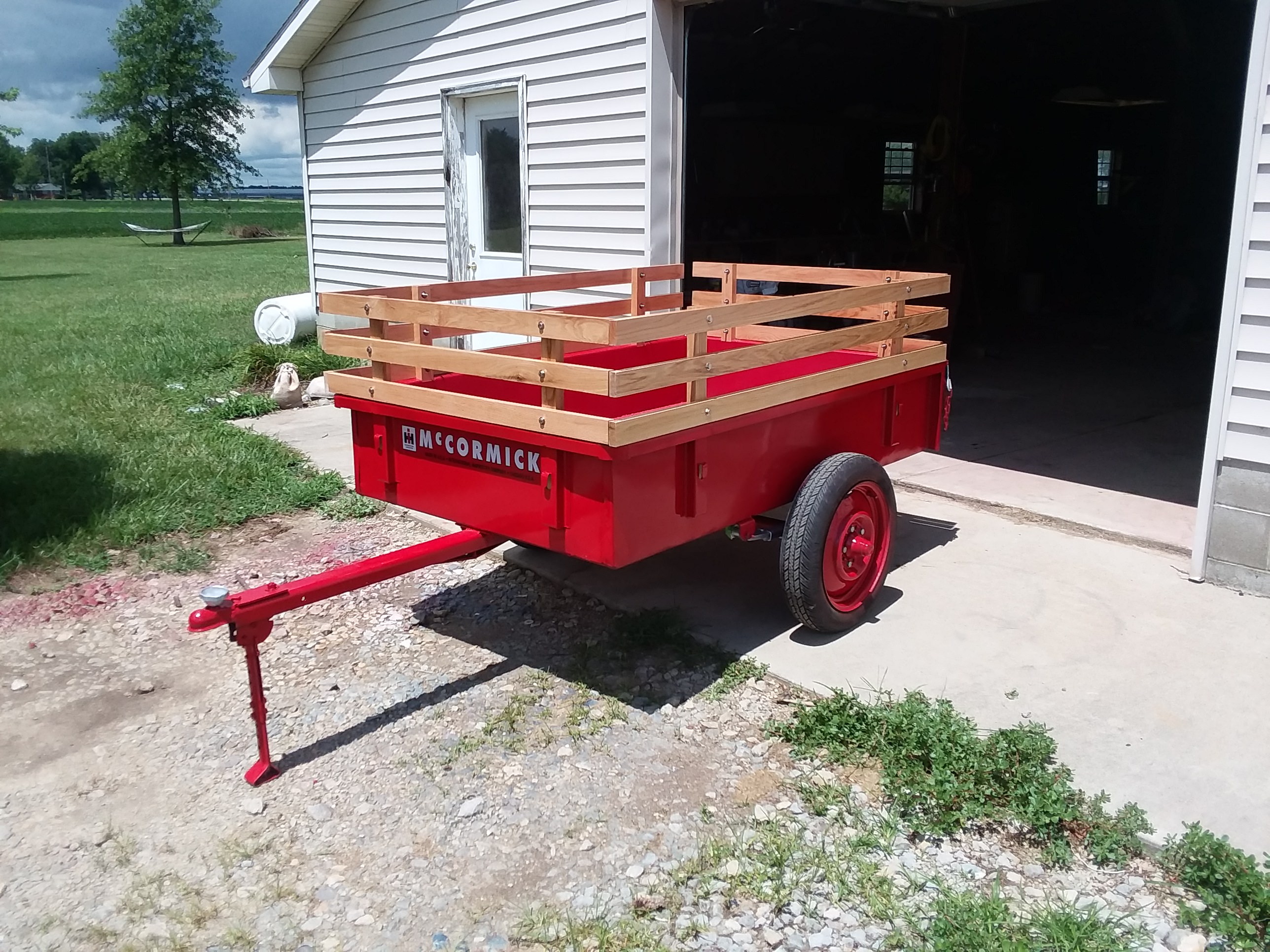 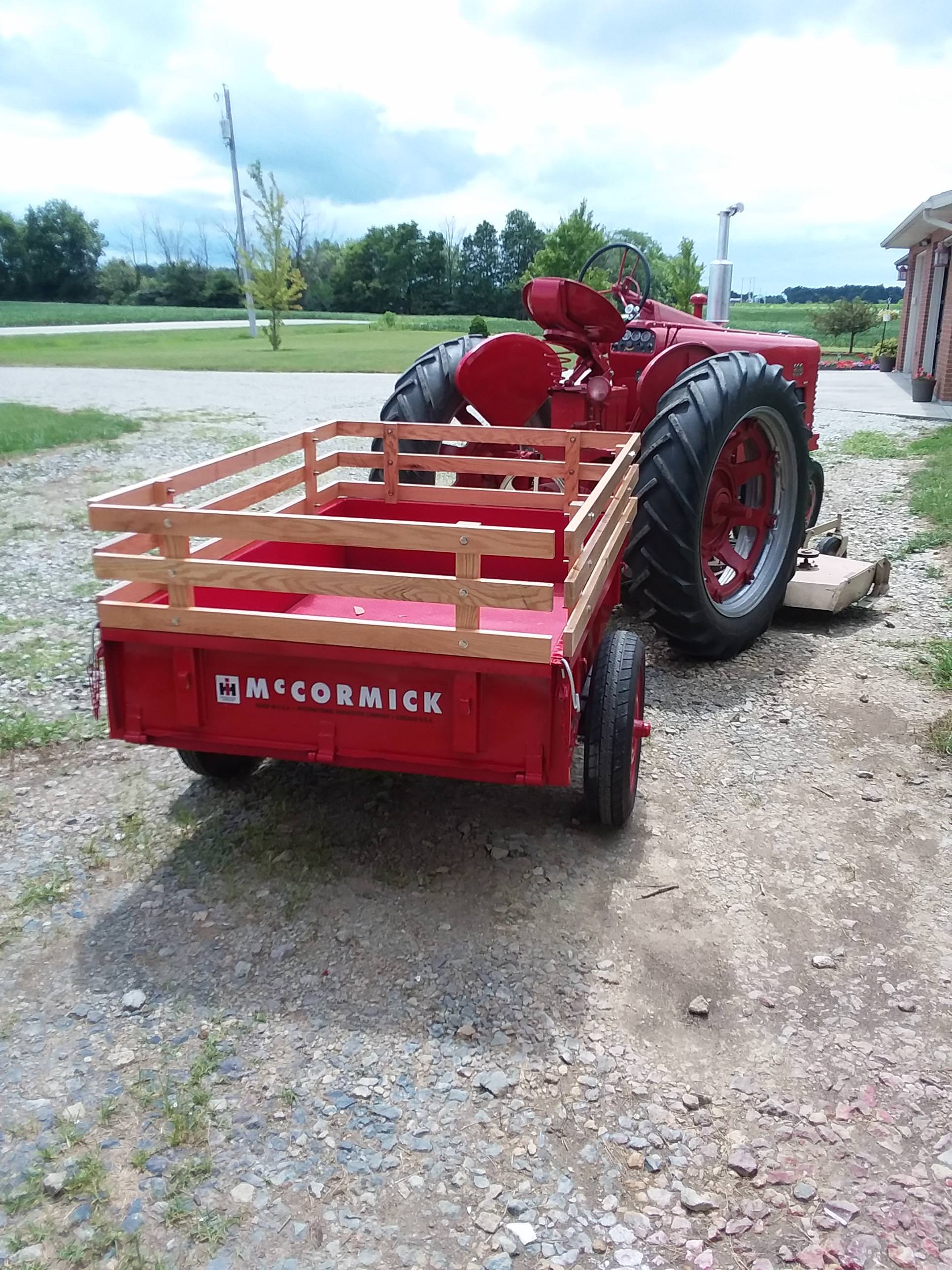 ShawnAgne wrote:Mine is the one that was made for Sears for the Jeeps I think, “isn't a dump bed.”Friend runs a print shop and made the decals for me.

And it has springs.
Frank
Top

ShawnAgne wrote:Mine is the one that was made for Sears for the Jeeps I think, “isn't a dump bed.”Friend runs a print shop and made the decals for me.

And it has springs.

Yeah forgot about that. Was going to take them off but decided not to.
Shawn Agne
Top

Had mine out today collecting firewood
Top
18 posts