The Cub Club -- Questions and answers to all of your Cub related issues.
Forum rules
Notice: For sale and wanted posts are not allowed in this forum. Please use our free classifieds or one of our site sponsors for your tractor and parts needs.
14 posts • Page 1 of 1

Looking for the horsepower to torque chart for the Cub's C60 engine.

From data extrapolated from several sources on other engines. It appears that the C60 engine would develop it's maximum torque at around 1150 to 1200 RPMs.

If the chart can be found it should provide some interesting information on RPMs/horsepower and RPMs/torque.

Are you sure such a chart exists?
Top

Charts were published with the industrial sales information. This is what was published for a Lo-Boy in '62, stripped engine running on 91 RON gasoline (about 86 or 87 octane on today's gas pumps). (Reading best I can from a chart.)

Torque curve is pretty flat. Makes horsepower almost a straight line against RPM. Pretty clear where most of the higher power came from in the later engines.
Top

Thanks Jim. Great information. At about 1600 full load rpm would be the place the engine operates most efficiently and puts the most grunt on the ground.

Also noted is that above 1600 full load rpm the torque starts to drop off - more rpms less torque.

The Cub engine for which the torque and horsepower figures are listed obviously has the torque peak at 1600 RPM. As engine speed is increased beyond 2200 RPM, the torque values will continue to decrease. At some higher engine speed, the torque value will drop enough that even the horsepower value will decline. Most modern tractors have the torque peak- torque is what turns the wheels and/or PTO- below the typical operating RPM. My Diesel tractor has 2470 RPM as the working speed and 1500 RPM as the torque peak. As the engine is increasingly loaded, the RPM drops, the ground speed drops. The lower ground speed decreases the demand for horsepower- such as when plowing, for example. As the engine is loaded enough to drop to 1500 RPM, the torque value rises and the tractor really "gets down to business". With mine, the torque value drops sharply below 1200 RPM. So when my tach hits 1200 while the engine is at full throttle, I need to hit the clutch quickly to avoid a stall. The torque curve for my Diesel is such that the maker claims a "torque rise" under load. The "torque rise" occurs when the engine RPM is lowered below maximum by heavy loading. Though my tractor is not a Kubota, Kubota does claim a 26% "torque rise" for one of their tractors. I was amused when U of Nebraska reported that it rose only 24% in their test. But the figures for the Cub show that the Cub engine will stall quickly after the loading reduces the RPM very much. The Cub has virtually no torque rise.
We had two identical Diesel buses and someone had tampered with one to increase the maximum engine RPM about 200 RPM over the original specifications. I knew exactly how fast each would run on level highway at full RPM. The one with faster engine would naturally go faster on level and downhill. But up steeper grades, each ran the same speed. Bumping up the RPM did not increase the torque and I suspect that the horsepower was no higher at the higher speed. Increasing tractor RPM also increases PTO speed, possibly dangerously so with certain implements.
Luck favors those who are prepared
Top

Its amazing how flat the torque is over the full RPM range.
JB, do you have these specs for any other IH tractor engines?
Top

I took the liberty of taking Jim's figures and graphing them. 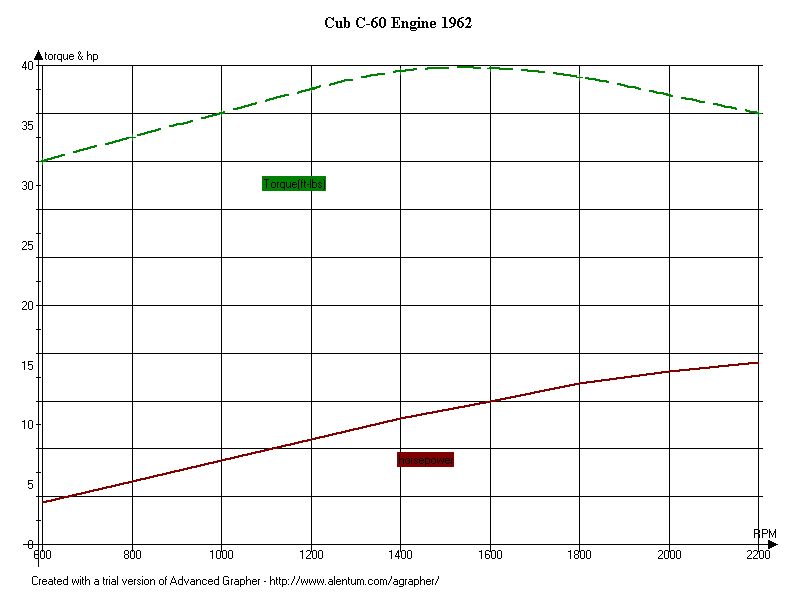 Just don't know why I can never get the image to appear inline.
Andy Wander
UBE, PA
'52 Farmall Cub "Wile E."
'72 Int'l Cub "Bugs Backhoe"
"Men are from Earth; Women are from Earth. Deal with it!" (attributed to George Carlin)
Top

WKPoor wrote:Its amazing how flat the torque is over the full RPM range.
JB, do you have these specs for any other IH tractor engines?


I have some for older (pre-1939) power units. A few of them were used in tractors.
Top

Thanks, Carl....but, you gonna tell me how you did it?
Andy Wander

Andy, sorry about that!

Copy and paste the images's URL into the message like you did, but bracket it by using "Img" button instead of the "URL" button in order to post the image. It will look like this before you "submit" the message (without the space between http and : )

"Img" displays the image, "URL" links to the image.

Click the Edit button on your post and you will be able to actually see the differences, including the differences in the url for the img tags to work. This should help to keep it straight.

As Carl pointed out.. for the image to appear you actually need the correct url of the image and then wrap the img tags around it..

See the How To Do Neat Things In A Post thread for more info to muddy the waters..

Re: C60. Horspower to Torque Curve

Users browsing this forum: No registered users and 4 guests