Look what followed me home from the auction

Forum rules
Notice: For sale and wanted posts are not allowed in this forum. Please use our free classifieds or one of our site sponsors for your tractor and parts needs.
12 posts • Page 1 of 1

Look what followed me home from the auction

Went to the auction today thinking I'd pick up a couple of Cubs for cheap. There were 5 or 6 Cubs there, and they did go for cheap.......but for some reason this girl caught my eye. I normally don't go for the bigger girls, but she ended up at my place for dinner and a movie tonight....what can I say? I checked the SN tag and she was made in 1970. I need to go find the manuals, as she has a few more levers and buttons than my Cubs do.........so I need to see how to make her do what she does best. Also need to make a lot more room in my shed tomorrow. 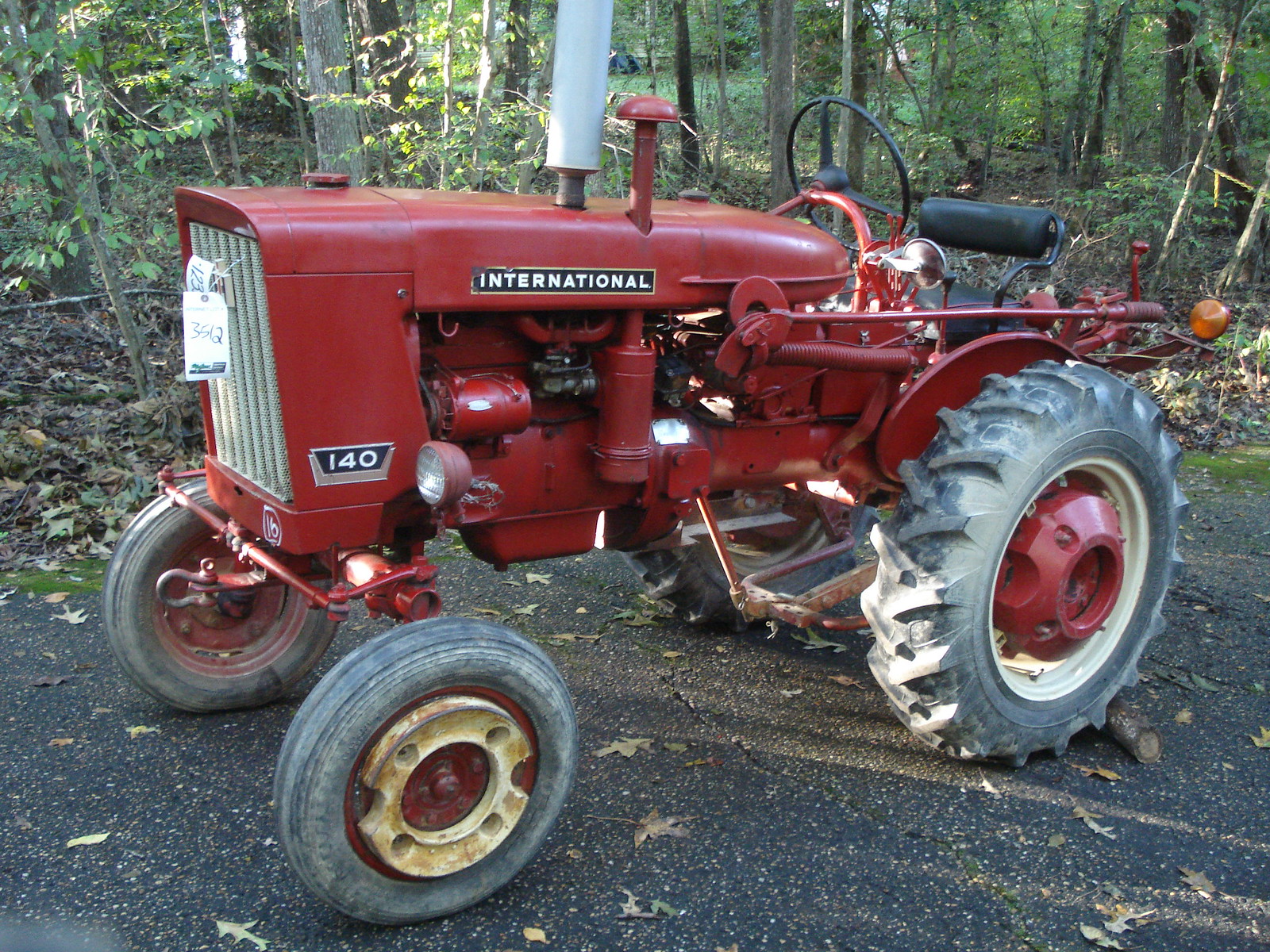 WOOT congrats! I wasnt setting out to own a 140 when I got mine but I love it! I think you and your new "date" will be very happy together, fast hitch too, way to go!

better to have it and not need it than to need it and not have it...( YES this includes CUBS! )
Top

Thanks! Going to spend the day getting all the normal things done when you bring a new toy home. I looked on here, and everywhere else last night for the manuals online and came up empty. If anyone knows where downloadable manuals are for the 140 please point me in that direction. Otherwise, I'll have to bombard you guys with tons of stupid questions.

I ended up talking to the seller (and original owner) of the tractor after the auction. He was nice enough to come find me and give me the background on the tractor. I should have gotten his phone number, but wasn't thinking straight. Too much auction excitement I guess.

The Super A Owner's Manual is similar enough to be useful. Also, look in the PDF manuals under Farmall Cub. You will find Preventive Maintenance manuals that include the 140. It will be for the earlier 140, but again pretty similar to the late 140 like yours.

Otherwise, you probably need to go to Binder Books for reprints.
Top

Will check the Super A and Cub manuals, as suggested......thanks. Think I'm going to rewire, as many of the wires are pretty much gone. The two wires to the generator have almost no insulation left on them....how they didn't short to the case I'll never know. Also the headlight wires are bare, hardly any insulation left on them and the rear light harness as been hacked to shreds. The original fuse holder has been replaced and behind the dash looks to be a bit messy. So some electrical work is in her future.

I pulled the battery last night and it was toast. Somewhere around 6.3V. No one had a group 26 battery locally, so I ended up getting the value (read that crap) battery at Walmart for $50. When I took the old battery out I noticed the "battery box" wasn't a box at all. It was just two sides with the top missing. So I looked online and they sell the 140 box, but it has front and rear flat panels as well as sides. I didn't see much space with the Group 26 battery in there for a front and rear panel.........did the 140 use a different size battery originally? Another ad showed only one flat panel with the 2 side panels..........if that's correct does the panel go in front or behind the battery?

Went thru the whole fuel system today........tank is spotless and now the sediment bowl doesn't leak anymore. Went thru the carb as well, all looked good in there. Popped the hood off and found some critters had made a very nice nest of twigs, leaves and grass on the intake manifold. Also found a plethora of extra nuts, bolts, etc in the tool box under the seat, as well as a weird handle thing I'll post a pic of later. And I noticed there's no hand crank to start the engine and no provision for one. Guess this is my first Farmall without a hand starter......I'm sort of bummed.

One weird thing I found regarding the paint...........the rear wheels are white, not galvanized. Not a pure as snow white, but more an aged white color, just like the white on the grille. More like cream white. I looked online at 140 pics last night, including two that claimed to also be 1970 vintage and didn't find any with white rear wheels. The paint appears original, no galvanizing underneath. So not sure what's going on there, but I kind of like the white......it's different.

Ok, time to go look at those manuals as suggested. Thanks again.

The 140 battery box was made up of several separate pieces. There were two sides and a top that should have been on all tractors. There is a separate piece for the front. But it was only used on tractors WITHOUT a Touch-Control system. As far as I know, there was never a back panel (between the battery and the electrical panel). I have heard of people adding them, on the theory that battery vapors degrade the electrical parts on the panel.

Some others that post here have more first hand experience with 140s than I do. They may have some different information than what I said.
Top

Thanks for the info. The battery boxes I saw online were repro's and covered a number of tractors besides the 140, so maybe the 4th side is for another application. There really isn't enough room for the 4th side panel between the touch control and the back of the dash. So what you say makes perfect sense. You're gonna love my next question.........

Bob you might want to look around for a front grader blade set up. If you find one listed for an A, 100, 130, or 140, they’ll all work.
Your new baby should really impress you if you set her up for snow duty.
In our area a full setup is a bargain at $300 for one needing TLC, in really good shape $400, but some folks think they have gold asking $600.
When the snow flies even higher.

They’re a bit harder to find than Cub blades and the prices reflect that.
Quote by Gary Pickeral I like
"If it can cast a shadow, it can be restored"
Top

That is a very nice 140 that appears to have original red paint and original decals. The decals are a bit different than typical but there is evidence that IH used those on 140s from the late 60s up sparingly with the more common decals. I've had a 1968 and a 1978 that had those decals so I don't think there is a rhyme or reason it has that style. If yours is a 1970 model, it should have a 12 volt generator with a key off/on and push button start. It should also have the older style cannister oil filter as the spin on filter came a couple years later. The "white" wheels appear to be the only part that was repainted in the past. The previous owner probably had new tires put on at some point and went ahead and painted the rims to help preserve them from rust. I can't imagine the wiring to be in THAT bad of condition, as I've owned several and usually with the exception of a small splice or simple connector repair, they are typically still in good condition. The tractor looks as if it was stored indoors with the patina it has. Should you wish to replace the wiring, I would contact Brillman Company as their harnesses are factory quality and take all guess work out of it and it looks very nice. I emailed a scanned copy of the 140 owners manual to someone here years ago to be uploaded and I don't think it ever got done. I could always send you an email.

I did see there are different decals offered for the 140, but didn't pay that much attention to it. The paint appears original just about everywhere, as do the decals.......but the odd thing is there are no "warning" or "caution" decals anywhere on the tractor and on residue or shiny paint where they are supposed to be located. But everywhere I look I only see one coat of paint. It does have the key on/off and the push button starter, as well as the older style oil filter. I've looked high and low for pics of the '70 IH tractor lineup to see if white rear rims was a paint scheme but haven't found any.......so either those rims are replacements, or as you say, they were repainted. I kind of like the white, as it matches the grille and front wheel weights........so for now I'll leave it that way. The harness really is junk. I didn't think so at first, but someone replaced the fuse holder with a new flat automotive fuse and the rest of the wiring behind the dash just crumbled when I tried to sort it out. Also, the wires to the headlights and generator have lost almost all their insulation, so I put heatshrink over those to get it all working, but the new harness is here and will be going on shortly. Oh, the rear light wiring and flasher wiring is also a total hack job with poorly crimped connections and different gauge wiring. I did end up buying the whole wiring kit from Brillman, including the batter and starter cables and will be noting the differences between their stuff and the original harness to post on here in case anyone cares. I was really tempted to buy the same harnesses from Porch to do a complete comparison, as I really want to know why they are so much more expensive.....but I just don't have $300 lying around looking for a home. The one thing I still haven't figured out is which bolt on the back of the touch control unit the ground strap bolts to. It enters the front of the battery box under the lid, but none of the bolts have any unpainted area to indicate where the ground strap was attached and I've looked at tons of pics of 140's for sale but none show the ground strap location. You'll see I posted about head gasket replacement. When I fired it up last I noticed a little bit of anti-freeze seeping out between the head and block........so that's getting done hopefully today as well as replacing all the radiator and water pump hoses and clamps. That assumes my box from Steiner shows up today on schedule. Thanks again for all your help!