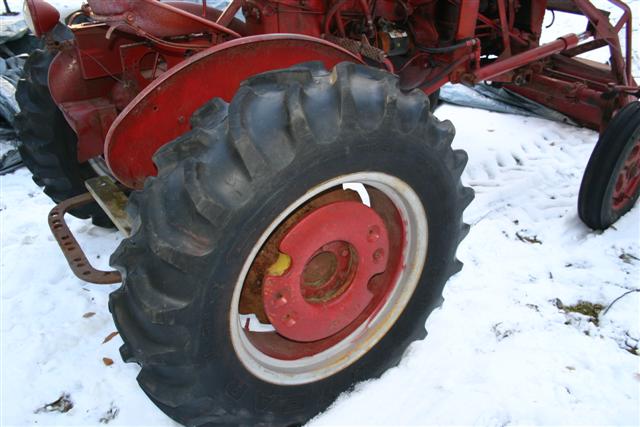 At least I got some brandy new tires on the rears

To compensate for the right wheel not having the weight of differenttial, and tranny righ over it. Without the cast wheel the right woudl spin a lot easier than the left when pulling a heavy load or plowing, also it woul raise up easier on a slope.
If you are not part of the solution,
you are part of the problem!!!
Top

Allen, it's built that way because the left side of the tractor is much heavier than the right side. Plus A's have a narrow footprint. Without the added ballast A's are unstable on slopes.
Top

I noticed the wheels are awfully far apart, and they're not set the same on each side which is kind of funny looking.

I was going to set them back in a bit - should I just leave set wide? Is the Super A more dangerous than the Cub?
Searchable Cub Parts Database and Manual Galleries at www.farmallcub.info - Computerized Carving at www.bitcarving.com
Top

Allen,
Physically, the cub was built to be a 2/3 model of the A. I'm guessing, but that should mean that the A is just as stable as the Cub, or maybe it is the other way around since the A came first. The A is capable of pulling a 2-bottom plow, which is a bit of a push for a 20hp engine, so many of them have been setup with extra weight on the lighter wheel, to prevent wheel spin. It is easier to manage than having to ride the right brake all of the time. Which is another thing that you often run into on As, the right brake is shot from being ridden all of the time.

The A is a real workhorse. I loved the one that I had, but it had been rolled over at some point in it's life, and when someone made me an offer on it, I had to let it go. I will definitely get another at some point in time. You made the right move, getting the A for the loader. The loader is a bit too much equipment for the Cub, but it was specifically designed for the A, and will not bog it down like it would a cub.
Top

If you are going to use the loader on the A, suggest leaving the wheels set out - wide. More stability with the loader elevated.

Allen,
One thing to check before you do to much is the bolts on the left finial drive to diff. as these were known to work loose on the SA's
If it's been broken I did it.
If its not broken wait till I touch it.
Top

Thanks guys! I'll check all of those things as soon as I get a chance

Ditto on the heavy cast wheel. It is to compensate for the offset engine. I guess the Cub is overall light enough that it doesn't need the extra weight.

That wheel weight came from somewhere else. Not sure what but it doesn't look IH.

On the rear end, I have never heard of the bolts coming loose. It would be worth checking though. Be sure to check the condition of the bearings and bushings in the bull gear housings, especially the left side.Take hold of the top of the rear tire, and shove up against it, like you're trying to rock the tractor from side to side. If you feel the tire/wheel wobble/move, it needs bearings and bushings. Pretty common problem and actually it'll run a pretty good while "wobbly" unless you just run the daylights out of it!

If you like a Cub, you'll LOVE the Super A. You'll find after a while that when you put the Super A to work, you actually have a REAL tractor!

Let us pray for farmers and all who prepare the soil for planting, that the seeds they sow may lead to a bountiful harvest.
Celebrating 75 years of the Super A: 1947-2022
Top
9 posts • Page 1 of 1